Home Having fun An AirVenture Oshkosh to Remember

GA shines on the world stage

I’m just back from the greatest aviation show on earth – EAA AirVenture in Oshkosh, Wisconsin.  One week each year, Oshkosh (home of the Experimental Aircraft Association (EAA)) is transformed into the center of the aviation universe.  And for this one week, Wittman Regional Airport (KOSH), becomes the world’s busiest airport.  AirVenture 2015 was even busier thanks to spectacular weather, education and entertainment for the entire family, and of course, the indescribable energy created by the passionate, diverse group of aviators that is the general aviation community.

More than a half million people attended this year’s event, making it the highest-attended show in at least a decade.  There were more than 16,300 arrivals and departures throughout the week, including more than 3,000 arrivals in a single day.  These numbers don’t include the thousands of operations conducted at nearby reliever airports.

Adding to the excitement and enthusiasm was a diverse lineup of aircraft including the B-52, F-35 Lightning, F-22 Raptor and the Airbus A350.  The arrival of the, eight-engine B-52 was the result of nearly eight months of coordination given the outrigger landing gear of the mammoth bomber spans 148 feet and the runway is only 150 feet wide at KOSH.

The impressive arrival of the F-22 Raptor was extra special for the local community.  Maj. John Cummings, an Appleton, Wisconsin native who spent years coming to AirVenture as a child, now leads the F-22 demonstration team and was personally welcomed by friends and family.

Goodyear’s newest airship, Wingfoot One made its first Oshkosh appearance continuing a long tradition of appearances.  Icon Aircraft presented EAA with an Icon A5, the much-celebrated and newly certified amphibious, light-sport aircraft initially unveiled at AirVenture back in 2008.

A record 74 Cessnas traveled from Juneau, Wisconsin to Oshkosh for the annual Cessnas to Oshkosh mass arrival.  Their number grows each year.  Pilots participating represented 30 states and two Canadian provinces.  While not near the number of Cessnas but equally impressive, were the 19 Stinson airplanes arriving together as part of the International Stinson Club – all produced between 1946 and 1949.

Chesley “Sully” Sullenberger and Jeff Skiles, best known as the pilots who “landed” their Airbus A320 on the Hudson River in 2009, received the Freedom of Flight Award at the EAA Annual Meeting.  Special tributes to legendary aviator Burt Rutan and the Apollo 13 crew added to the magical week.  Rutan, continuing to push the envelope in aircraft design, is already working on his latest.  The SkiGull, Rutan’s 46th design, is a trimaran-hulled, amphibious airplane designed to land on water, snow, ice, and other unimproved surfaces.  Rutan plans on bringing the SkiGull to AirVenture 2016.

EAA officially opened its Aviation Gateway Park, meant to inspire and get youth interested in aviation and innovation.  As if there weren’t enough going along the flight line, the Park includes the Innovation Center, Forums Area and Education/Career Center as well as drone cage which attracted a lot of attention throughout the week with daily competitions. 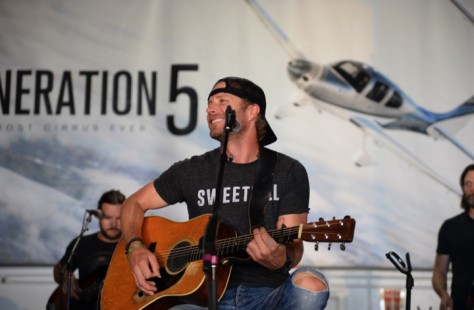 Country music superstar and pilot, Dierks Bentley, performed the opening night concert to a massive crowd on Boeing Plaza.  Dierks’ interest in aviation, like most of us, goes back to childhood growing up in Phoenix.  Now a Cirrus SR22 owner and full-blown aviation enthusiast, he relies on his freedom to fly to keep him better connected to his wife and three kids while maintaining a busy travel schedule.  He even has a position on a new Cirrus Vision Jet and is looking forward to the jet transition.

The coordination and volunteerism never ceases to amaze me at EAA AirVenture.  In particular, Oshkosh legend Fred Stadler received the Phillips 66 Leadership Award.  About 15 years ago, Stadler and his wife moved from Texas to Oshkosh, in part to be close to EAA’s headquarters.  Most days during the summer you’ll find Stadler helping out at Pioneer Airport on the EAA grounds and piloting Young Eagle Flights.  In fact, Mr. Stadler recently flew his 6,000th Young Eagle but graciously shuns the spotlight in favor of the thousands of volunteers and supporters that make the program possible.  To his point, the number of volunteers on the grounds at AirVenture exceeded 5,000.

An annual tradition of AirVenture is its salute to veterans.  Courtesy of an American Airlines B737, nearly 100 Vietnam veterans flew from Oshkosh to Washington, D.C. to visit the memorials that honor their service and sacrifice.  The veterans visited the Vietnam Veterans Memorial, the Smithsonian and Arlington National Cemetery before returning to Oshkosh.  The day’s events also included a parade and warbird air show.

On the opposite end of the spectrum was the constant entertainment of the Fun Fly Zone, also known as the ultralight area.  At the southernmost reaches of the field each year, ultralights gather at the Fun Fly Zone to showcase the latest innovations and enjoy the many forms of purely recreational aviation in light, single-seat aircraft.

The night airshow didn’t disappoint – yes, night airshow – aerobatics without any real outside reference.  AirVenture’s night airshow featured the AV-8B Harrier, the F-4 Phantom and the F-100 Sabre.  Pilot Gene Soucy also performed in his modified Grumman biplane with wings that include 20 stainless steel tubes that store fireworks.  The show concluded with fireworks and the “wall of fire.”

AirVenture 2015 was the best show I’ve attended.  I say that each year and each year I mean it.  I can’t possibly take you to Oshkosh by virtue of describing the week’s events and my personal experiences, but I can say there’s nothing else like it in aviation.  It’s a reminder that the aviation community is not only alive and well, but thriving.  And no matter your experiences in aviation, there’s always something new to learn, see and enjoy.

Exploring aerobatics will make you a better pilot

My experience as a rusty pilot – Part IV

My experience as a rusty pilot – Part III

Sign up for our free email newsletter, packed with tips, tricks and news for pilots.

Sign up for our free email newsletter, packed with tips, tricks and news for pilots.