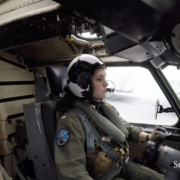 Everyone was a student pilot once, including the most seasoned Navy pilots who land on aircraft carriers in the middle of the ocean. In this video, you’ll get to ride along with one such pilot, as she learns how to land the C2-A twin turboprop on the pitching deck. It’s a little more complicated than landing a Cessna 172 on a long runway, but the fundamentals of pitch and power are the same.

Stay up to date with the latest articles and selections from our archives.